Even though it hasn’t worked for quite some time now, my previous PHP WebSocket chat application has garnered quite a bit of attention and is still one of my most heavily trafficked posts. As a result I thought I’d provide you all with a working script as of Feb 15, 2012. Because I’m your typical lazy developer, I’ll be building on top of other peoples’ work – most notably PHPWebSocket.

I want to stress that this tutorial is designed to be extremely basic and as such does not give alot of functionality out of the box (but provides all the tools necessary to add more). It’s simply a working example of a PHP-based WebSocket server.

The Implementation – Server Side

While the PHPWebSocket class works, it puts alot of variables and constants into the global scope. This is a big no-no in my opinion so I moved the entire script into a class PHPWebSocket and added the following functions:

Below is an example of your server script for a very basic chat application (Note that I’ve set the server to run on 127.0.0.1. Set this to your network IP if you want others on the network/internet to be able to connect to your server):

The Implementation – Client Side 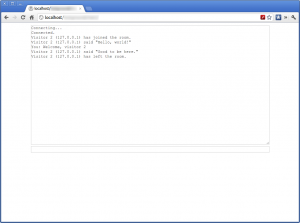 I wasn’t impressed with the JavaScript class provided with PHPWebSocket either, so instead I’m using a more flexible one called FancyWebSocket (which I’ve also made modifications to). Like the server functions I added, FancyWebSocket allows you to bind functions to open, close, and message events so your page should look something like the following:

How to Run It

After downloading, simply open a terminal and type

Then load it up in your browser.

If you want to see the true awesomeness of WebSockets and what they can do for you and your site, head on over to Kaazing and check out their Lightning Fast Stock Trade demo. It’s very cool stuff.

A redditor whipped up a version 13 compatible websocket implementation here. The comments include a couple of links to other implementations.

I would also highly advise you check out Ratchet. It’s an up to date websocket implementation for PHP.