Note: Also see the prequel to this post: Why I Hate Unity

As your typical Ubuntu user, I find Unity infuriating and have devoted countless hours towards bringing back the usability and functionality that came with Gnome 2. I’ve racked up quite a few tweaks so far that have gone a long way towards doing this and figured it was about time to share them. My aim was to make 11.10 look and feel exactly like 10.10. I’ve attached below a screenshot of the final result. 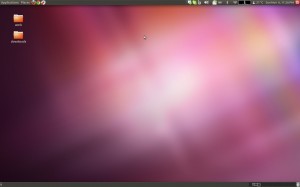 One of my last niggling issues with Ubuntu 11.04 is, as you’d expect, another remnant of Unity carried over to the Ubuntu Classic desktop. This remnant is the notification area (or ‘Systray’ to you Windows converts) not allowing all applications access to it. Below is the line you’ll need for bringing Ubuntu back to the 21st century:

Thanks to the good fellows at Web UDP8 for this little piece of magic.

PS. It appears the VLC icon STILL does not always appear. There’s a question posted on the VLC forums about this issue and it looks as though it’s due to an incompatibility between QT4 and Gnome. Stay tuned for further developments on this issue.

So my previous post How to Move App Menus Back Into Their Windows in Ubuntu turned out a little more bitter than even I had first intended. As a result I think it’s only fair I give a few more reasons as to why I have such a strong dislike towards Unity.

Let me preface this post by saying that I was actually quite looking forward to Unity. It looked relatively promising (although I was slightly worried about reports it wasn’t as customizable as Gnome) and after I ended up liking icons on the left when thinking I wouldn’t, I was determined to give Unity a fair go. I would also like to say that many of these issues will probably be sorted out in later bug fixes and updates – but that does not help me right here right now on my shiny new Ubuntu install a few days after release.

So here it is: a ‘by no means complete’ list of reasons using Unity is not a good idea at this point in time.

You’ve recently upgraded to Ubuntu Natty and discovered that Unity is crap. Don’t worry – you’re in the vast majority. One of the many issues with this disastrous attempt at a shell is that it moves application menus into a global menu in the top panel. This may be useful for small screens – but for the other 99% of the market it’s just downright frustrating.

After a bit of searching I came across this post describing how to banish the global menu back to the warped hell from whence it came. You want to remove the indicator-appmenu package.

This is but one of a great many great challenge you’ll face if you decide to continue on with Unity. Good luck…and may God have mercy on your soul should you choose to stick with it.