Welcome back to my simple to-do application tutorial for Laravel 5. This tutorial is relatively long so I’ve broken it up into multiple posts.

The source for each part can also be found on GitHub.

So far we’ve learned how to install and set up Laravel, set up some project and task resources and displayed them to the user. In this chapter we’ll learn how to set up create, edit and delete pages/actions.

If you’re a Laracasts member, watch the videos RESTful Forms, Create/Edit Forms and Form Requests & Controller Validation. These videos explain far better and in far more detail the concepts below. If you’re serious about learning Laravel I’d highly recommend you sign up.

Before we do anything it would make life a little easier to add create/edit/delete/back links to our projects and tasks pages.

For the most part this should be pretty self explanatory. The only tricky concept is the delete link. Resource controllers require a HTTP DELETE method to be sent. This can’t be done with a standard link so a form submit to the given route is required. See Actions Handled by Resource Controller in the documentation for more information. 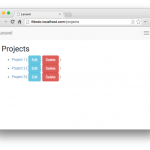 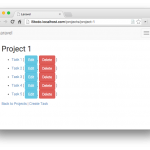 Creating the Add and Edit pages

With the listing pages all set up, we need to be able to add and edit projects and tasks. The create and edit forms will be pretty much identical so instead of duplicating them, we will inherit from a single form partial for each model.

Do the same for tasks but with updated routes:

Now the are a few new concepts here:

Firstly you’ll notice my use of blades @include method. This includes the form view that we will define later (for now, just create the files /resources/views/projects/partials/_form.blade.php and /resources/views/tasks/partials/_form.blade.php). Because the same form will be used on both create and edit pages we need its submit button to have a ‘Create Form’ and ‘Edit Form’ message appropriately so a submit_text variable is passed to the view.

The forms require different HTML <form> tags so rather those were split out from the _form partial and placed directly in the views. The Add form is a simple POST request to the projects.store named route and the Edit form is a PATCH to projects.update. This may seem confusing but it’s just the way RESTful controllers work.

Also notice the use of Form::model(). This is called called form model binding and though this doesn’t do much now, it will be used to automatically populate the edit form later when we add the fields with using Form::input().

Form helpers provide alot of functionality for free. If you go to /projects/create and view page source you’ll see something like the following:

See the _token field? This is a CSRF token automatically generated by the {{ Form::model() }} call which prevents cross-site request forgery. Suffice to say it’s a good thing and we didn’t even have to do anything special to get it!

We need form markup for our projects and tasks. Thanks to form model binding, we can just use Laravel’s Form helpers to output all the fields we need.

That’s about it. In your browser you should now be able to browse to your add and edit pages. How easy was that!

We have project and task add and edit forms displaying and a pseudo-form for deleting them. Now to make everything work as advertised.

Firstly add to the top of your controllers:

Now for the store, update and destroy methods.

Again the above is pretty much self explanatory and boilerplate-free thanks to route model binding and Laravel’s beautiful expressive syntax.

If you submitted one of the forms now, you’d likely see an error MassAssignmentException: _token. A mass assignment is where you pass an array of data to Model::create() or Model::update() the way we’re doing in our controllers, instead of setting one field at a time. To fix this simply add an empty guarded property to each model.

One thing to note from the above is my use of the with() function. with() passes a flash (one time use) variable to the session which can then be read on the next page load. We now need to check for that message and display it to the user. Open /resources/views/app.blade.php and add the following:

Try creating a project. The message will display as it should however refresh the page and it will be gone.

Today things got a little more interesting. We added create and edit forms and delete functionality, we learned about CSRF and Form Model Binding and even a few more blade and Eloquent functions.

With everything now working, have a play around. Create, edit and delete your resources. Remember you can always php artisan migrate:refresh –seed when you’re done and your database will be instantly reset.

In the next and final lesson we’ll put on the finishing touches including form validation and slug management. Stay tuned!