I’ve been frustrated for a while now at Chromes lack of a decent Amazon S3 extension. Firefox has S3Fox but the closest Chrome users come is S3 which only lets you browse and not modify the files in your buckets. Well that’s just changed!

Over the weekend I finally gathered up enough free time to add support for creation and deletion of files/buckets. While I was in there I made a few other modifications to improve performance and clean things up a bit.

Download the latest version (and the source: Github repo) 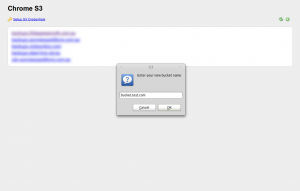 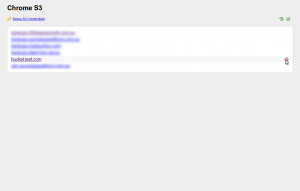 Delete link when hovering over buckets 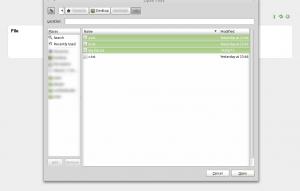 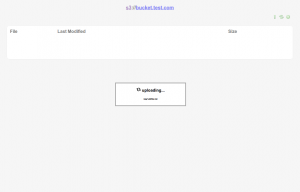 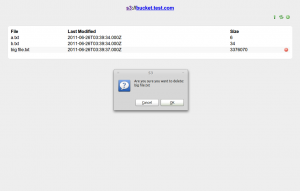 The confirmation you see when deleting files 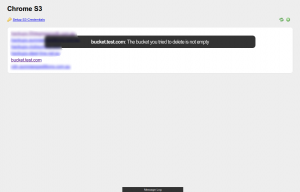 If you’re paginating your data and have tens or hundreds of pages, chances are you’d prefer only a subset of these be displayed in your page number list (example – see page list at bottom). Django-paginator gets 90% of your work done for you however it doesn’t support this one very useful feature. To make a developers life easier, meet flynsarmy_paginator!

This app is a simple subclass of django’s built in Paginator and Page classes. The only changes I’ve made are to add an optional adjacent_pages parameter to FlynsarmyPaginator and a .page_range_data variable to the FlynsarmyPage object with the following contents:

A while back Samsung released a line of relatively cheap “EcoGreen” 2TB hard drives. Being the storage hungry IT nerd that I am, I picked up 2 of the things before finding out their firmware contains a known data write bug requiring a firmware patch best summed up with the following:

“It [the drive] will “forget” to write out its buffer if certan SMART commands are sent to the drive. This is the very definition of silent data corruption.”
– source

Samsung has released a patch but it requires booting into DOS which is incredibly difficult to do on todays floppyless PCs. After a bit of googling I came across the following two solutions to get the job done:

This is the easier solution of the two but it is also the one that didn’t work for me. Michael has created a FreeDOS image with the patch merged in. For the download and installation details, see this post.

After trying and failing the above, I settled for a bootable USB image instead. User ZDOS has written up a handy tutorial here which I’ve detailed a bit more in depth below:

For plenty more useful information on this issue, I found this forum thread very helpful.

It seems firefox 4 has stupidly removed the option to save tabs on exit however there’s a way to get this very useful functionality back. Here’s how:

Taken from mozilla support. A big thank you to user Helper7677 for this solution!

Due to the antics of some douchebag (IP address 109.120.34.16) I’ve had to look into blocking pages based on IP address with .htaccess files. This may come in handy to others out there so I figured I’d write up my findings.

To block everyone except specific IPs here’s what you’ll need (more info):

To apply this restriction only to specific files, wrap the above code in the <File> tag:

Thanks to user NuclearMeltdown on the #httpd channel on Freenode for his assistance.

Firstly the background: I own a HTC Magic (32B) running Cyanogenmod 6.1. My internet connection is 1.5Mbit down, 256k up ADSL. My router is a Billion 7401VGPR3 with strong signal and several PCs connected to it – each with flawless internet.

The issue: Around the time I bought a new Billion 7401VGPR3 router, the phones wifi started performing so badly it became unusable. DNS lookups would take anywhere in the vicinity of 45-60 seconds or often simply time out and once the download did somehow get going, it would also occasionally time out. I figured this was just an issue with the hardware in my phone – being 2+ years old, it’s getting a bit dated by android smartphone standards. I was wrong.

During my recent trip to Japan, I happened to score free wireless in one of the hotels (Ahh free wireless, how I love thee) and the wifi unexpectedly worked perfectly. Puzzled by this, I did a bit of research. As it tuns out, this appears to be a common issue with HTC phones. I came across this thread on the issue.

The fix: A few suggestions were made on how to fix it. One member suggested trying a different router, which I did (A Netgear FWG114P) and suddenly wifi worked fine. This was all the proof I needed that the Billion was the culprit. I switched the encryption scheme on the Billion from WPA2 to WEP 128 as per another users suggestion (yes, yes, I know. Flame me if you must, but I already know) and my Android is now lightning fast again.

Thank you androidforums, I was on the verge of giving up and buying a new phone but now I’m good to go for several more years 🙂

Over the last few days I’ve been working tirelessly on this site – moving it to a new home and adding a server-side syntax highlighter (wp-syntax) as well as various other behind-the-scenes improvements. The result should be a faster and load and better resulting experience while browsing.

I installed firefox-4.0 (currently 4.0b8pre) on Ubuntu Maverick RC earlier today and all was going fine and dandy until I had to open a Google Docs spreadsheet. I’d receive a message stating:

I checked documents and they seemed to be fine. It turns out this is an issue with Google not recognising FF4’s user agent string. The easiest way to solve this issue is to type about:config into the address bar and set

Here’s another little gem for you HTML5 fans out there – link prefetching. Adding the following into a HTML meta or link tag will result in the target being loaded in the background after your current page.

Both ‘prefetch’ and ‘next’ are accepted.

Here are a few advantages of using this method:

There are several limitations to this method that should be noted:

Let me preface this post by stating that I have the design talent of the average developer – that is to say: none. So when I decided to start learning about CSS3 @font-face I thought I was going to be in for a night of pain; boy was I right.

The post headings on site are rendered in the Museo font using Cufon. Cufon is an amazing piece of JavaScript that allows you to embed fonts into webpages making them visible in all browsers. It works as advertised, however it has a habit of causing pains for visitors on slower connections. For this site, the cufon script is 17.8KB and Museo font package is an added 190.4KB – a hefty download. At this point, the developer in me would declare the benefits not to be worth the drawbacks and scrap it all together. Luckily for all of you though, I’m constantly surrounded by talented designers, namely That Stevens Guy and begrudgingly blindly follow what they tell me to do in that department. So cufon has stayed. Is there a better solution though? Meet @font-face.